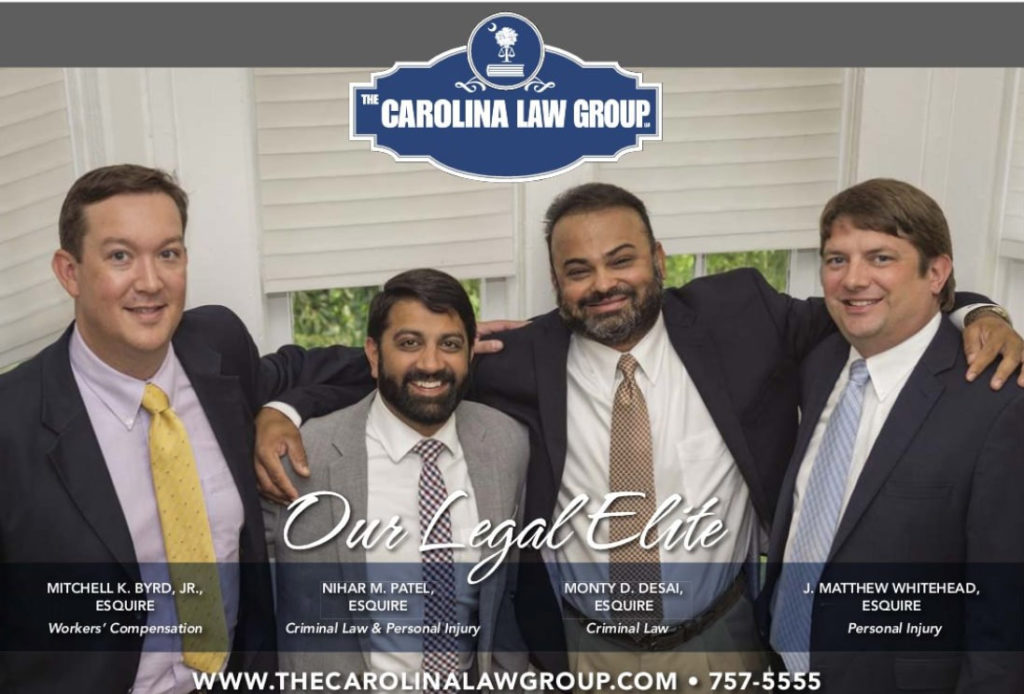 For the fifth year in a row, attorneys from The Carolina Law Group have been named to the Legal Elite of the Upstate List by Greenville Business Magazine. Matthew Whitehead received the most votes for Personal Injury Law, while Mitchell K. Byrd, Jr. was listed among the elite for Workers’ Compensation Law, Nihar M. Patel was listed for both Personal Injury and Criminal Law, and Monty D. Desai was listed in the elite for Criminal Law the August 2019 issue.

The Legal Elite of the Upstate is an exclusive list that recognizes attorneys who do exceptional work in their respective fields. Candidates are nominated by their peers, and finalists are chosen by votes of area attorneys. Attorneys may nominate an attorney from their own firm if they also nominate an attorney outside the firm, according to the magazine.

In 2018 and 2017, Mitchell K. Byrd, Jr. was recognized on the list for Workers’ Compensation Law, in 2017 Nihar Patel was recognized for Criminal Law, and for the past four years Matt Whitehead for Personal Injury Law, also garnering the most votes within that competitive category in 2018. They had previously been recognized in both 2016 and in 2015, when attorney Monty Desai was also named to the list.

Being named to Legal Elite of the Upstate is one of several honors received by the attorneys of The Carolina Law Group since the firm was founded in 2011. Monty Desai, Nihar Patel, and Matt Whitehead are lifetime members of the Million Dollar Advocates Forum, reserved for attorneys who have achieved a trial verdict, award, or settlement of $1 million or more, and they have also been named Super Lawyer Rising Stars. Monty and Nihar have been listed as National Trial Lawyers Top 40 Under 40 in South Carolina. Monty was also recognized by the National Academy of Personal Injury Attorneys as ranking amount the Top 10 Under 40 for excellence in the field of personal injury in 2015.

The Carolina Law Group, LLC, has two office locations in Greenville, one in Spartanburg, and one in Greer. The firm represents people in a variety of serious and time-sensitive matters, including personal injury, workers’ compensation, criminal defense, and immigration cases. The firm features a diverse staff, many bilingual in English and Spanish.