What to Do if a Dog Attacks You?

The Carolina Law Group > Blog  > What to Do if a Dog Attacks You?
0 Comments

What to Do if a Dog Attacks You?

A recent vicious dog attack in South Carolina made national headlines when mother-of-three, Kyleen Waltman, needed both arms amputated after being mauled by three dogs in March 2022. Less than a year earlier, another South Carolina dog attack was in the news when a 7-year-old was tragically killed after he and his brother were attacked by a group of dogs near Marion.

Sadly, dog attacks are not uncommon. Our law firm, unfortunately, has had many clients who have been victim to a dog attack. They are wide-ranging in circumstances, ages and sex of the victims, nature of injuries, breed of dog, etc. Approximately 4.5 million people in the US are bitten or attacked by a dog every year, approximately half of whom are children. Nearly 20% of those bites require medical attention. Fortunately, fatalities from dog bites remain rare – with 30-50 people dying each year in the US as a result of a dog attack – but in addition to the risk of death, dog bites can cause severe infections, injuries, and permanent disfigurement and disability.

A dog may show signs of aggression before biting or attacking. But dog bites and dog attacks can also happen suddenly and without notice. Here’s what to do, based on what we have found in our years of handling dog bite cases, if a dog attacks you.

Stay Calm and Do Not Show Fear

This is easier said than done, of course. It’s true, however, a dog can sense anxiety and fear (via hormones and pheromones released by the body in scary situations) and research has shown this makes them more likely to attack aggressively. Dogs also sense and 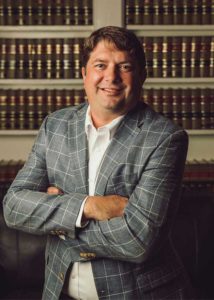 respond to your energy, so project calm, dominant energy to show you are in charge.

Prevent an Aggressive Dog from Biting You

If you sense a dog becoming aggressive, experts suggest doing the following things to calm the situation down and hopefully avoid an attack:

If the dog senses you are not a threat, they may back down without an altercation.

Use Another Object to Distance and Distract

If you have a purse, bag, umbrella, or anything else that’s large, put it in between you and a dog showing signs of aggression. If the dog has already started biting, try to get the dog to bite that other object or an item of clothing (for example, a water bottle or the sleeve of your sweatshirt rather than your arm). This might be enough for the dog and give you time to get away.

For example, just a couple of years ago, we represented a woman who was suddenly attacked by two dogs while running through the North Main neighborhood in Greenville, SC. Although the dogs initially knocked the woman to the ground, she had the wherewithal to protect her face and neck, was able to get up and retreat to the closest porch. There she held the two dogs at bay by placing herself behind a large, wooden rocking chair. One dog lost interest, while the other scurried away moments later when the good samaritan home owner came to the door to offer our client assistance.

Move Away Slowly if You Can – Do Not Run

Experts say running away will likely trigger the dog’s prey instinct and make the attack continue or restart. If you have the opportunity to get away, do so slowly by backing away and keeping the dog in your sight (no eye contact). This may not always be an option, but can often be effective to diffuse a dog showing signs of aggression — e.g., baring teeth, growling, etc.

Fight Back and Yell for Help

If the attack has begun or the steps above to de-escalate the situation didn’t work, it’s time to yell for help and to fight back. Our client who shielded herself with a rocking chair did this simultaneously to get the attention of a stranger inside the home who was able to come to her aid.

Keep in mind, pepper spray is legal in South Carolina and can be an effective deterrent against an attacking dog. Use a weapon if you can, either one on you (a firearm or knife) or one nearby (like a rock). You can also physically fight the dog if you’re able to by kicking or striking them with an object in the eyes, groin, or ribs. We know most dogs are wonderful and would never hurt a soul. The reality, however, is some dogs are aggressive and sometimes turn violent — whether by way of nature, nurture or otherwise. In any event, you have a right to protect yourself, and perhaps a duty to protect others if able, when these instances arise.

It’s best to remain in a standing position if possible, but if the dog brings you to the ground, curl into a fetal position and make fists with your hands to protect the most vulnerable parts of your body. The “best” place to be bitten by a dog in terms of survivability and long-term outcome is on the forearm or the lower leg. This is exactly what our client, the runner, did after being pummeled to the ground. It just may have saved her life.

This is also easier said than done – if a dog clamps onto you with your teeth, your first instinct is to pull away. But doing this can make the dog hang on tighter and bite harder, leading to more severe injuries.

Call 911 if attacked or bit by an unknown dog out in public and/or if you’ve received injuries. Law enforcement and other agencies equipped to respond to situations and investigate to the extent necessary will step in to protect the public.

Seek Medical Attention – Even if only “To be Safe”

Even a minor bite that breaks the skin can lead to a bad infection, so have it looked at by a medical professional immediately. We had a teenage client once who was “nipped at” by a small and cute house dog that belonged to a neighbor. Thinking merely an insignificant puncture wound, he placed a bandaid over it and went about his business. About a week later, this teenager was laid up in the hospital for several days receiving intravenous antibiotics for a severe infection. He nearly lost his hand. Because of the delay in seeking treatment, he nearly lost his life. If blood is drawn, please do not take your injuries for granted. It is best to make a report of the incident and seek medical help.

South Carolina has a “strict liability” law when it comes to dog bites, meaning the dog’s owner or the person in possession and control of the dog can be held liable for a dog bite or dog attack even if they didn’t know the bite would happen. Whether the dog had any prior history of aggression is of no consequence. South Carolina law automatically assigns responsibility on the first, and every, unprovoked attack. If you’ve been injured by a dog bite or dog attack, you have three years in South Carolina to bring a claim against the dog’s owner or other person responsible for the dog to recover damages to help with medical treatment and compensate you for noneconomic damages.

We had a client once who worked for an automobile parts supplier. While making a parts delivery to a local business, a large dog jumped on him, violently knocking him into a large, heavy desk. As a result, the man sustained a significant shoulder injury requiring surgery and several months out of work. The business where this occurred tried to deny any responsibility because, as they said: (1) the dog had never shown any indication of acting aggressively; (2) the dog didn’t bite but just “jumped”; and (3) the dog belonged to one of the employee’s who would occasionally bring the dog to work and, therefore, was not the responsibility of the business. Thankfully, this gentleman, who was trying to figure out how to pay bills and medical expenses while out of work, called us to find out if he had any potential legal recourse. And he did. As mentioned before, it makes no difference what history the dog has had prior to the first incident. We are a strict liability state. Second, the strict liability extends to, not only bites, but any unprovoked attacks. Finally, when the business allows the dog to be on premises, it assumes possession and control of the animal and all of the consequences that come with it should the dog attack someone.

Speak with the Personal Injury Attorneys at The Carolina Law Group

If you or a loved one has been bitten or attacked by a dog in South Carolina, talk to a personal injury lawyer with experience handling dog bite cases like the attorneys at The Carolina Law Group. We can help you understand your options and walk you through the process so you can recover the damages you deserve after a traumatic dog attack. Call one of the numbers below to set up a free, no-obligation consultation to talk about your case.

Call us at one of our four offices or contact us online to schedule your free consultation with one of our attorney’s. Our business hours are Monday – Thursday 8:30am – 5:30pm & Friday 8:30 am – 5 pm. Weekend and evening hours by appointment only. Our Greenville, SC law firm offers Spanish, Hindi, and Gujarati language translation services for your convenience.