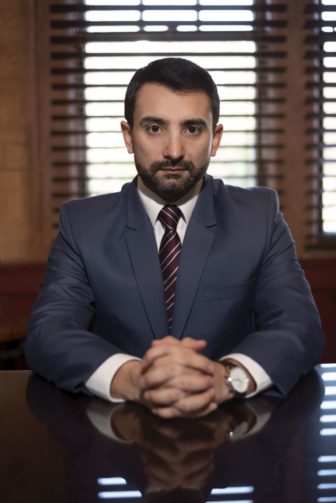 It was a long journey to the bar, but Julian was determined to get his law degree no matter what it took.

Julian immigrated to the US from Colombia in 2001 (later becoming a citizen in 2010) and started working as a Spanish-English interpreter for a Greenville law firm in early 2004. His interest in the law grew over time, and he became a case manager, then a paralegal. From there, he got his insurance license so he could act as a Licensed Claims Adjuster for the cases he was handling. In spring 2011, Julian left his firm to work with Monty and Nihar when they founded The Carolina Law Group. He has been at CLG since day one, helping injured people seek justice.

Julian knew he wanted to become a lawyer. With support from Monty, Nihar, and the rest of the team at The Carolina Law Group, he continued to work for them throughout his schooling. He had already completed two years of Greenville Tech night classes, then went to King University in Bristol, TN on a full scholarship for cycling, where he graduated with a degree in political science with a minor in business. (Highlights of his two years cycling for King include being conference champions twice and achieving a Top 5 place in Nationals in Ogden, Utah.)

Julian then attended Charlotte School of Law in Charlotte, NC, where his sister lives. Everything was going well until the school closed in late summer 2017, when he was just a semester shy of graduation. All the students had to make new plans, and Julian ended up finishing his legal education at Appalachian School of Law in Grundy, VA, completing an additional semester to make up for credits he lost during the transfer.

Julian graduated in May 2018 and passed the bar in 2019 with a high score, allowing him to practice law in more than 25 jurisdictions, should he choose to seek admittance. As of now, he has been admitted to the SC bar – having been sworn in by the Supreme Court of South Carolina in January, 2020 – and he has also applied for admittance to the North Carolina bar.

Julian credits his wonderful wife, Diana Martinez, whom he married in October 2019, for helping him through all the years of schooling, work, and long commutes in order to achieve his goal. He also says that it wouldn’t have been possible without the support of Monty, Nihar, and everyone at The Carolina Law Group being flexible and making it easy for him to work remotely. “I don’t think another firm would see your value and support you like this,” he says.

SERVING CLIENTS AND THE HISPANIC COMMUNITY IN A NEW WAY

As an attorney, Julian is currently focusing on personal injury and workers’ compensation cases. He’s most passionate about these two practice areas because he feels that he’s really helping people, giving them the knowledge and support they need to go up against insurance companies that have so many resources.

And with Spanish as his mother tongue and previous experience as an interpreter, Julian is passionate about helping the Hispanic community, too. He saw a need in the Upstate for another Hispanic attorney, and he’s happy there are many more now than there were fifteen years ago. One Hispanic attorney would never be enough to serve the whole community, he says.

Another way he serves is as the Education Chair for the Greenville Chapter of Prospanica, a nonprofit dedicated to promoting education and professional opportunities in the Hispanic community. As part of his work for them, he helps Hispanic students get scholarships, pursue their dream careers, and make connections in their field.