A Long Week for South Carolina

A Long Week for South Carolina

Posted by Mitchell Byrd
in Blog

“The sun peeked out, floodwaters began to recede, and the power was back on Tuesday across battered South Carolina.” 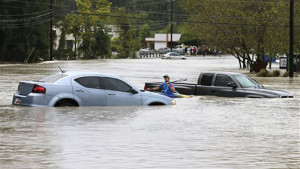 This is what the headlines reported on Tuesday morning after a very rough week for South Carolina. After 10 days of consistent rain and wind across the state, the final rainfall totals fell between 6.3 inches and an astounding 26.88 inches (weatherchannel.com). With all the rain from Hurricane Joaquin rivers, ponds, streams and lakes across the state have flooded causing massage damage, loss of life, and power outages across the state.

Public Safety Officials are also reporting an astounding 4,300 calls for service and more than 1,800 collisions.

This is an unprecedented time for South Carolinians. Gov. Nikki Haley and others have referred to the storm and resulting damage as a 1 in 1,000 year event. Although many rivers and streams have crested and are now beginning to retreat, the resulting damage to roads and infrastructure could remain for some time as officials attempt to manage an effort for their repair.

At Carolina Law Group we want to urge everyone to be safe drivers ESPECIALLY in these wary situations or on roads that are unfamiliar. Don’t let yourself become part of the Joaquin damage total.

For more on the impact that Hurricane Joaquin has had on South Carolina check out the following links.